Hello & Goodbye (Not For Long)

It’s been ages since I’ve blogged, but I’ve been communicating in others ways, such as making videos (and this one) or trying to come up with amusing US election comments on Facebook and Twitter. I’ve also been keeping pretty busy doing a few appearances as a Focus Area Champion for United Way Ottawa, including an active evening of talking up the cause at Schmoozefest 2012.

Spending time with my father in law (David Kingstone) recently got me fired up about the return of CFL football to Ottawa. I am excited about it for myself, having been a fan since a very young lad, and having suffered through the many horrendous ownership and management debacles of the past 3 decades. But I know David is longing to walk along the south side of the canal on a crisp fall afternoon, cross the bridge over Bank Street, and take a quick peek into the stadium. Have our friends from Smiths Falls arrived yet? Is the field goal kicker back on track? Are they wearing the vintage uniforms? I can’t remember where my keys are most days, but I know that I sat in Section G, Row 30, Seat 1 (Julie had 2, and David 3). Just across the aisle was local radio star (video will never kill him) Milky, also a huge Ottawa CFL football fan. I’ve been bothering him about football a lot the 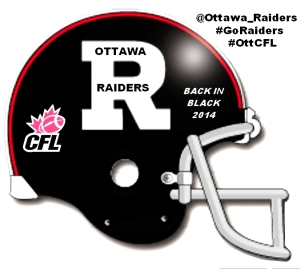 last two weeks, but Milky writes me back, so it’s his own fault.

I’ve become really wrapped up in the search for a new name for the team. Long story short, the new franchise cannot use Rough Riders (the name of the team throughout most of its history) or any version of that. Even “Ottawa Riders” has been ruled out. The team most recently functioned as the Ottawa Renegades, but it seems clear that name is being retired. So, we need a new name!

I’ve decided to champion “Ottawa Raiders” and I hope you will join me! A huge percentage of the fan base wants to return to the classic “R” helment of the past. And many of us longing for a return to our Glebe-shattering chant of “Let’s Go Riders!” will have little trouble making the slight swith to “Let’s Go Raiders!” There are lots of other R-name suggestions out there, some like “Rivermen” that try to build on the legacy of Rough Riders (the name originally had nothing to do with horses, it had to do with log drivers) but I don’t need my professional marketing certificate to make the case that Raiders is a better choice!

It’s been very busy at LiveWorkPlay. We had a very successful Annual General Meeting and are blessed with a terrific board of directors. There has been a lot of turnover, so the one interesting challenge is that after 17 years we’ve arrived at a place where most people around the table don’t have a direct connection to the early days. It’s not a big problem but it means Julie and I need to put more thought into presenting the context of current issues. There are already some great plans with the board for the coming year and I know I am going to learn a lot from being a part of it!

The work itself is going gangbusters. We had several of our members moving into homes of their own at the newest CCOC building, supported several new jobs with local employers, and we continue to enjoy a steady stream of volunteers who are looking to explore a shared interest in sports, recreation, clubs, course, classes, and just good old socializing with our members.

It’s a great time for a vacation, and we’re off to enjoy two weeks starting on Saturday. Unfortunately I’ve learned to be a bit careful talking about taking a vacation, especially sharing anything about how much I am enjoying it. Not because I think someone is going to track me down and break in (thus disturbing our enormous UFC houseguest and his very hungry Doberman with the razor sharp teeth) but rather because working in the non-profit sector, some people have the peculiar belief that we should be paid poorly and never take vacations.

No wonder nonprofit leaders suffer from some of the worst burnout statistics of any career. There was a time when I did feel a bit guilty about taking time off,

and I often worked 70-80 hours a week as a routine. You know that saying about working hard or working smart? Sometimes if you work to hard, you just can’t work smart – you are too tired and you really can’t underestimate the importance of reflecting and evaluating. It’s amazing how many times I’ve felt stuck when trying to solve a problem after battling it for days. Then I’ll be in the middle of Frontenac Provincial Park and suddenly the answer will pop into my head while I am observing a porcupine.

If you are facing burnout, I highly recommend taking a true vacation where you completely unplug. I know some people who know me well find it hard to believe that I can do this, but I can! Sometime when I entered my 40s, I figured out it was essential not only to my health, but to my professional performance. What else has changed is building a bigger team at LiveWorkPlay and learning to share leadership and decision-making in a more effective way (credit Julie bigtime on that). One of the steps in working your way to the point of being able to take a vacation and relax is to make yourself a little less critical – in your own mind and in reality – to keeping the world turning.

So, a special shout out to all of my colleagues. You rock. And I’m not just saying that because I’m in a reclining lawn chair in November.

I'm a citizen of Ottawa (Ontario, Canada) and co-leader of social change charitable organization LiveWorkPlay.ca, which helps the community welcome and include people with intellectual disabilities, autistic persons, and individuals with a dual diagnosis to live, work, and play as valued citizens. LiveWorkPlay was named Ottawa's Best Non-Profit of 2019 by the Ottawa Board of Trade and Ottawa Business Journal "Best Ottawa Business Awards " With Julie Kingstone, I am co-owner of Wellstone Leadership Services, dedicated to supporting a culture of excellence for non-profit, private sector, government organizations, collaborations, and partnerships. I am a regular guest (monthly) of the News 1310 Power Lunch radio show, and I write a monthly NPQ North column for Nonprofit Quarterly. I also have alter-egos that support the Ottawa RedBlacks and Ottawa Fury. Find me on Twitter @socialkeenan @liveworkplay @wellstoneleader @redblacksfanabove @furyfanabove. I'm all over Facebook, Instagram, and LinkedIn too. Also spotted outdoors from time to time, mainly in the Glebe area.
View all posts by Keenan Wellar →
This entry was posted in Uncategorized. Bookmark the permalink.

5 Responses to Hello & Goodbye (Not For Long)