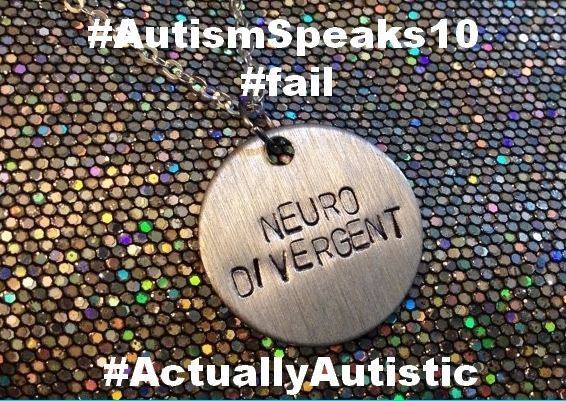 It’s a complicated story, but I’m going to oversimplify because you should really get on Twitter (even if you don’t have an account) and check out #AutismSpeaks10 and experience this phenomenon for yourself.

The organization Autism Speaks (I’m not linking to them because wherever you try to land on their website they try to procure a donation with a page that you have to decline) was attempting to host online celebrations of its tenth anniversary, only to find the campaign hijacked mainly by individuals who identify as autistic (using#ActuallyAutistic) along with a number of neurodiversity allies like myself.

The world’s largest autism-branded organization by budget, Autism Speaks is known for a focus on autism as a type of disease to be prevented and eradicated, in stark contrast to the approach of many advocates who see autism as a part of humanity, and want to focus on barriers to inclusion rather than the direct or indirect messages that autism is a demon.

By this focus on “autism as part of humanity” I do not mean that this position suggests people who have autism cannot benefit from direct support. The point is that the focus should not be on medicalizing the individual or their autism as something to be cured. If this sounds like exaggeration of the Autism Speaks perspective, watch this video and then if you still feel that way, please let me know. I’ve got ready access to endless examples, including the experiences of people with autism who found Autism Speaks totally inaccessible to their voice or their needs.

Because of backlash this video was removed from the Autism Speaks channel, but of course, it lives on elsewhere. To put it mildly, the #AutismSpeaks10 campaign has backfired in colossal fashion, to the point where even “cute cat video” giant BuzzFeed News has reported on the story and is featuring the video above.

I find the whole scenario a glorious lesson in the powers of social media citizen engagement. We tend to romanticize or trivialize the importance of Twitter and social media from time to time, but it can be a legitimate vehicle for social change, whether it is exposing corrupt governments, or offering a voice to ordinary citizens who cannot otherwise compete with a multimillion marketing budget.

These types of protests are not uncommon in the political or corporate landscape, but for the non-profit community that might think themselves immune, think again. There is a new era of non-profit accountability that is not going to be about overhead or CEO salaries. It is going to be about mission, vision, and values with demands for transparency and accountability the likes of which we have never seen before. I’m glad.

I'm a citizen of Ottawa (Ontario, Canada) and co-leader of social change charitable organization LiveWorkPlay.ca, which helps the community welcome and include people with intellectual disabilities, autistic persons, and individuals with a dual diagnosis to live, work, and play as valued citizens. LiveWorkPlay was named Ottawa's Best Non-Profit of 2019 by the Ottawa Board of Trade and Ottawa Business Journal "Best Ottawa Business Awards " With Julie Kingstone, I am co-owner of Wellstone Leadership Services, dedicated to supporting a culture of excellence for non-profit, private sector, government organizations, collaborations, and partnerships. I am a regular guest (monthly) of the News 1310 Power Lunch radio show, and I write a monthly NPQ North column for Nonprofit Quarterly. I also have alter-egos that support the Ottawa RedBlacks and Ottawa Fury. Find me on Twitter @socialkeenan @liveworkplay @wellstoneleader @redblacksfanabove @furyfanabove. I'm all over Facebook, Instagram, and LinkedIn too. Also spotted outdoors from time to time, mainly in the Glebe area.
View all posts by Keenan Wellar →
This entry was posted in Uncategorized. Bookmark the permalink.

1 Response to The #AutismSpeaks10 Hijack: Twitter Humanity Takes Over