Keenan Wellar co-founded the LiveWorkPlay organization in 1995, and has served as the Co-Leader and Director of Communications since 1997. LiveWorkPlay helps the community welcome and include people with intellectual disabilities, autistic persons, and individuals with a dual diagnoses to live, work, and play as valued citizens.

From a startup with just two staff, LiveWorkPlay has grown to a team of 25 with over 150 volunteers and more than 200 community partners. Keenan’s calling to this work started with a happy accident, as he revealed at a 2014 conference panel of the Association for Fundraising Professionals.

Mr. Wellar has undergraduate degrees in history and education from uOttawa, is a certified Ontario teacher, and completed a Masters of Applied Linguistics and Discourse studies at Carleton University. He holds a Professional Certificate in Non-Profit Marketing from the Sprott School of Business and is a BoardSource Certified Governance Trainer. In 2018 he became a Core Gift Master Facilitator.

In 2015, Keenan authored The Courage to Fail, the Will to Succeed:

Twenty Years of the LiveWorkPlay Experience 1995-2015 a celebration of a community that has never stopped learning together. With a foreword by social capital guru Al Condeluci, the book demonstrates how best intentions are never enough: making communities stronger means continuously challenging our own words and actions.

After being recognized with an individual United Way Ottawa Community Builder Award in 2010, LiveWorkPlay itself was celebrated as a Community Builder of the Year in 2013. Keenan also served as Focus Area Champion for the Employment of People with Disabilities from 2012-2015. In 2019 LiveWorkPlay was named Ottawa’s Best Non-Profit by the Ottawa Board of Trade and Ottawa Business Journal at the “Best Ottawa Business Awards.”

An internet pioneer and early adopter of social media, Keenan Wellar accepted the Community Living Ontario Social Media Award in 2014. You will find him on Facebook, Twitter, Instagram, and LinkedIn to name just a few of his favourite platforms.

An active community volunteer, in recent years Mr. Wellar has been focused on his roots in education, joining the Algonquin College Developmental Service Worker Advisory in 2016, and has coached through the Carleton University mentorship program since 2014.

Keenan was inducted as an Honourary Member of the Golden Key International Honour Society in a 16 November, 2018 ceremony at Carleton University.

Keenan is active as an advocate in various local, national, and international movements supporting the inclusion of people with intellectual disabilities, including the From Presence To Citizenship provincial collaborative.

He has made over 200 media appearances on topics related to inclusion and disability, and in 2017 began accepting invitations for media commentary on broader social and political issues. This includes a role as a returning guest of the 1310 News Power Lunch. 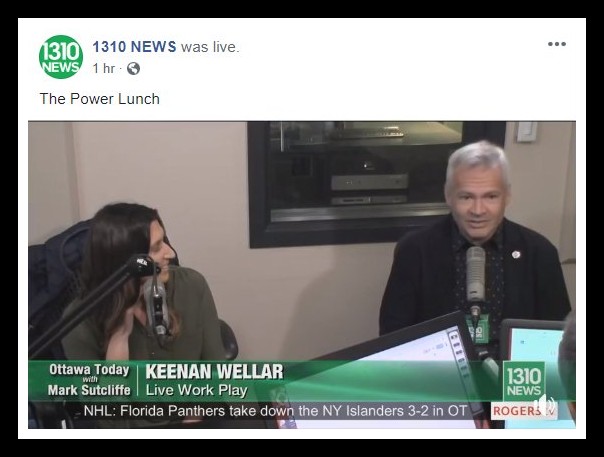 Keenan has authored articles in numerous journals, mainly on topics related to non-profit governance and in 2018 became a regular contributor to Nonprofit Quarterly.

In his personal life, he is an enthusiastic Ottawa RedBlacks football fan, a passion he shares with his wife Julie Kingstone, along with a love for kayaking and photography.

Keenan and Julie are also co-owners of Wellstone Leadership Services Incorporated, providing coaching and consulting services to the non-profit community.